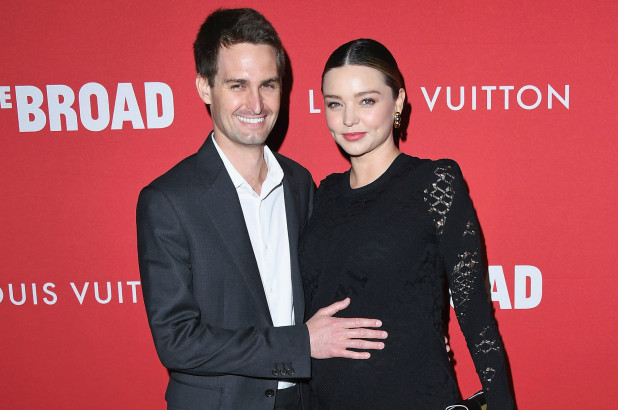 Australian model Miranda Kerr gave birth to a baby boy hart Spiegel on May 7, 2018 in Los Angeles. This is the second child for Miranda and the first with her husband Evan Spiegel. The baby Hart is named after Evan’s grandfather.

The new parents released a statement announcing the news and said, “Words cannot explain how happy we are to welcome our beautiful son into our family. Miranda is doing well and Flynn is excited to be a big brother. Thank you for the kind words and wishes during this very special time”. The 35 year old former Victoria’s Secret model is also a mother to 7 year old son Flynn from her former husband Orlando Bloom.

A report had confirmed in November 2017, that the couple was expecting their first child together which was almost six months after they got married in presence of 40 guests in an intimate ceremony at the backyard of the Snapchat co-founder’s Los Angeles house. Miranda showed off her baby bump in January 2018 while attending the Golden Globes after party. The model looked gorgeous in a leopard print fitted black gown to show support to the Time’s Up movement.

Miranda Kerr during an earlier interview shared with Jimmy Kimmel that her son Flynn was ready to be a big brother after she got married to Spiegel. Miranda recalled, “The day after the wedding, he comes running in and he’s like, ‘Mommy, is it in there?’ I was like, ‘Honey, give it a minute.’ ” Kerr got married to Orlando Bloom in 2007. They have a son together Flynn Christopher Blanchard Copeland Bloom, who was born in January 2011. In October 2013 Kerr and Bloom announced that they separated several months before and intended to end their marriage. The model started dating the Snapchat co-founder in 2015 and got married in May 2017.