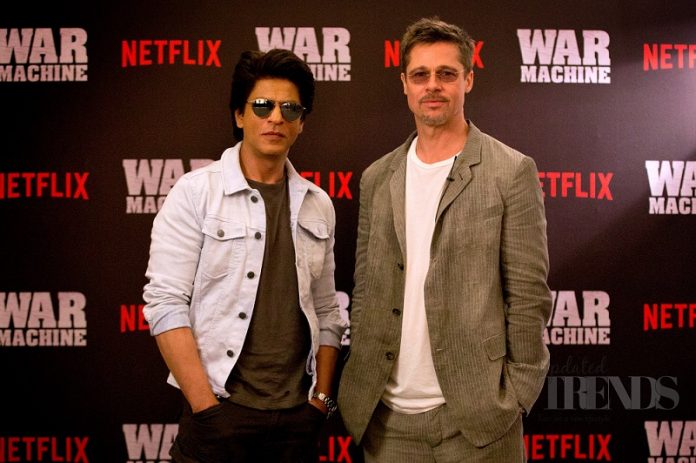 The veteran Hollywood actor, Brad Pitt who can definitely give any other actor a run for their money will be soon seen in a lampooning war movie titled War Machine. Post the promotions in Japan, Pitt was seen promoting the movie in Mumbai on May 23, 2017.

His arrival to Mumbai was something that was kept a secret. He was placed at a posh hotel in South Mumbai with super tight security. Last evening, the star made an appearance at the screening of the movie in Mumbai and also during the promotions. At the promotions he was accompanied by the Bollywood actor Shah Rukh Khan, where both of them were interviewed by Indian film critic Rajeev Masand. Both Brad and Sahah Rukh are arguably the best actors. The interview which took place in Oberoi Trident situated at Nariman point was a pretty muffled event where only a few journalists were allowed with the promise hat there would be no recordings. They talked everything form the life line of Bollywood to the Brad’s Oscar winning film 12 Years a Slave. Though Brad was the Hollywood guest, SHah Rukh took away most of the limelight. According to a leading daily

“ALTHOUGH THE TWO SUPERSTARS SAT COMFORTABLY NEXT TO EACH OTHER, THEY WEREN’T EXACTLY WHAT YOU’D CALL, HITTING IT OFF. THERE WAS A BIT OF RESTRAINED TENSION AND THERE WERE THOSE AWKWARD COMPLIMENTS”

War Machine is a satirical war movie packed with comedy and drama where Captain General Glen McMahon (based on the real-life Gen. Stanley McChrystal), played by Brad Pitt, gets posted in Afghanistan. Besides Pitt, this movie will also star Anthony Hayes, John Magaro, Emory Cohen, Anthony Michael Hall, Topher Grace, Will Poulter, Tilda Swinton and Ben Kingsley and is sure to leave you in splits along with getting across a strong message.

While his first visit to India was with former wife, actress Angelina Jolie, Pitt’s second visit definitely has been great. Catch the movie which will be streamed on NETFILX this Friday and until then entertain yourselves with this trailer of War Machine.