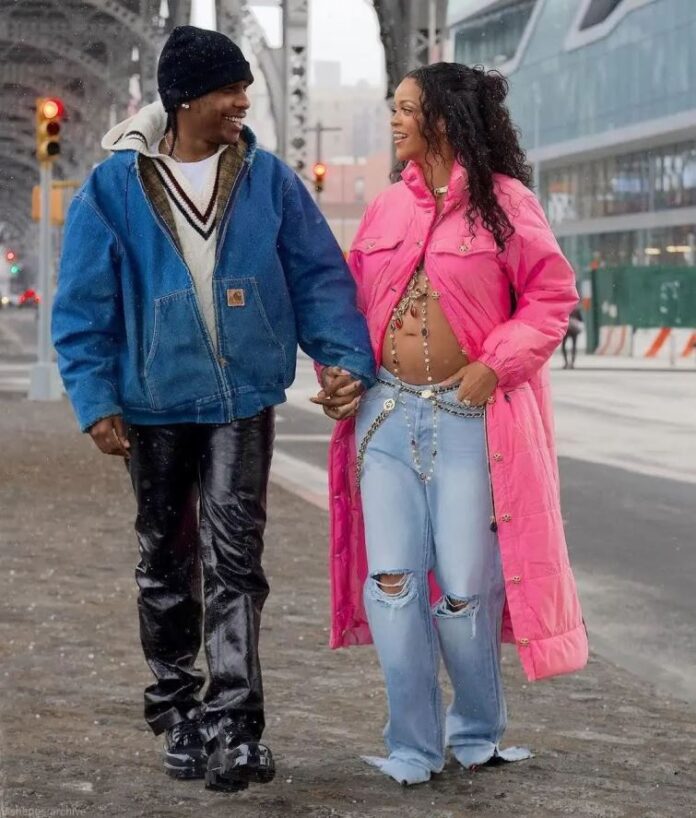 After enough speculations, it has been confirmed that singer and entrepreneur Rihanna is expecting her first baby with American rapper ASAP Rocky. The singer showed off her baby bump on the streets of New York City during the weekend. Rihanna and Ricky were seen walking hand in hand while he gave her a kiss on her forehead.

The fashion designer showed off her baby bump as she wore a long pink padded jacket that was unbuttoned at the stomach. The singer was also wearing a few accessories and a gold cross. On the other hand ASAP Rocky was at his casual best with a white half sweater with a blue denim jacket that were paired with black pants and black boots. Rocky in 2020 had revealed that she was dating Rihanna and called her as the ‘love of his life’.

Rihanna was earlier dating a Saudi businessman Hassan Jameel. The relationship st6arted in 2017 but they split in January 2020. In 20007, the singer had started dating American singer Chris Brown but the relationship came to an end in 2009. Soon she started dating rapper Drake which was the longest relationship from 2009 to 2016. This was when Rihanna revealed that she got back in to a relationship with Chris Brown, but then in 2013Brown had staged an interview when he revealed that he and Rihanna are no longer together. On the other hand Rocky earlier dated Australian rapper Iggy Azalea in 2011 but the relationship lasted for only a year and ended in 2012. In 2013 he started to date model Chanel Iman but  they too broke up in 2014. Rocky was born as Rakim Athelaston Mayers and is professionally known as ASAP Rocky. He is also the member of  the collective ASAP Mob. He released his first studio album Long.Live. A$AP in 2013 which debuted at number one at the Billboard 200 and became a certified  double platinum.