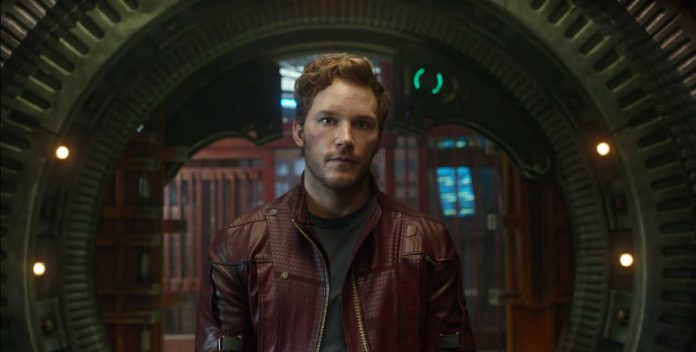 Chris Pratt can join the league of legends now, as he officially gets his star on the famous Hollywood Walk of Fame. The Guardians Of The Galaxy star, along with his comedienne wife, Anna Faris and son, Jack were attended the ceremony on Friday, April 21. Pratt is currently on tour for the second instalment, Guardians Of The Galaxy Vol. 2, but he was also joined by his cast mates as they cheered him on for this great honor.

The star began his career as a comedian, most well-known for his role in Parks & Recreation. He was the husky, cute, cuddly guy that would make fans go “awww” when they saw him on screen. However, his transformation was welcomed when he buffed himself up for the reboot of the dinosaur franchise, Jurassic World. He then cemented himself as a true A-list actor after he was cast as Star-Lord in the hit Marvel movie series, Guardians Of The Galaxy. Though fame has quickly taken over his life, he continues to remain one of the most down-to-earth stars, a total family man.

Wife Anna Faris kicked off the ceremony with an emotional speech about her husband. Chris Pratt even did a few episodes on her comedy show, Mom to support his wife. She said during her speech, “This is actually a ‘thank you’ speech. I’m the beneficiary of all this, because I get to spend every day with this wonderful man. I know that if our circumstances were different and we weren’t as fortunate to be standing here and living our Hollywood life, we would be happy in the woods together, I think.”

Chris Pratt, in turn, had only meltingly beautiful things to say about his wife. “I want to thank my wife, Anna, I love you. You’ve given me so much. You have given me the greatest star in the galaxy, in my little boy. I love him and I love you…You make me laugh like nobody else. You’re very caring, and I thank you for your trust and your sacrifice – and for your dedication and your heart. I will do my best to protect it, and in return I will give you all of those things as well. You have my heart, my dedication and my trust.”

He began his speech by talking about what has got him to where he is today – his faith. “I’m a man of faith, and I believe that God works in mysterious ways and gives us signs and gifts in life – and those gifts often come in the form of people. So I’ll just spend the rest of my time expressing gratitude for the people in my life who are gifts.”

And in related news, Chris Pratt sat down with Indian comedian, Kenny while promoting Guardians Of The Galaxy Vol. 2. Check it out –