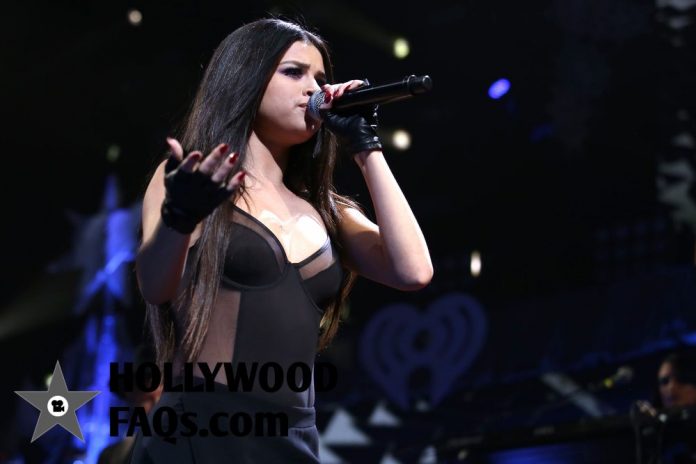 As the covergirl of Vogue magazine’s April issue, Selena Gomez looks unbelievably gorgeous. At such a young age, she has managed to achieve so much, something that many of us can’t even dream of. For an outsider, she has gained the trifecta of a perfect life – successful career, good looks and a man at her side. But for the Hands To Myself singer, it is a different story behind closed doors.

In the forthcoming issue of the world’s #1 fashion magazine, the former Disney star talks about what’s been eating her alive lately. It is something that plenty of young women rely on, are obsessed with and can’t live without. It’s a platform that proved Selena Gomez’s own insane level of popularity – Instagram. And the singer admits to being “addicted” to the image sharing social media platform. “As soon as I became the most followed person on Instagram, I sort of freaked out.”

when your lyrics are on the bottle ? #ad

Above is the image posted by Selena on her Instagram account that earned her the most number of likes. Only Beyoncé managed to defeat that record, when she posted her maternity shoot of her expecting twins.

Anyway, back to Selena’s self-confessed addiction. “It had become so consuming to me. It’s what I woke up to and went to sleep to. I was an addict, and it felt like I was seeing things I didn’t want to see, like it was putting things in my head that I didn’t want to care about.”

“I always end up feeling like sh*t when I look at Instagram. Which is why I’m kind of under the radar, ghosting it a bit.”

Though Selena Gomez has been famous since she was a child, having starred in the hit Disney series, Wizards Of Waverley Place, then went on to make her own solo successful career in music and movies, she’s still not made piece with the level of stardom that fame has got her. “Look, I love what I do, and I’m aware of how lucky I am, but – how can I say this without sounding weird? – I just really can’t wait for people to forget about me.”

As for her addiction with social media, she’s apparently deleted the apps from her phone, and now her personal assistant is in charge of posting photos. Also, she’s got a new number, one that she says only 17 have access to, with around 2 of them being famous.

@SelenaGomez is our April cover star! Tap the link in our bio to read the full interview. Photographed by @mertalas and @macpiggott, styled by Camilla Nickerson.