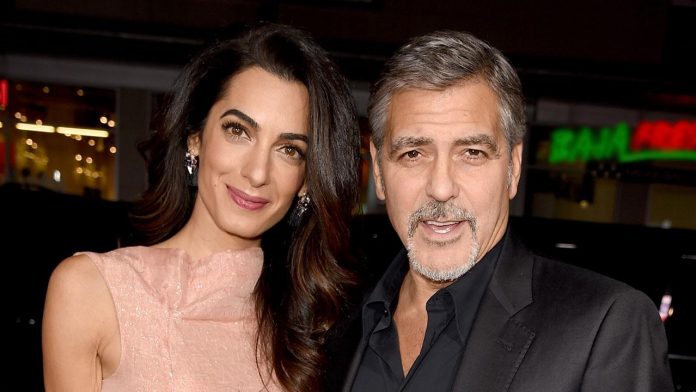 After months of speculation, rumors and tabloid fodder, it can finally be confirmed – one of Hollywood’s most sexiest men alive and his beautiful wife are going to become parents for the first time!

Julie Chen, co-host of The View said: “Congratulations are in order for George and Amal Clooney. The Talk has confirmed that the 55-year-old superstar and his highly accomplished 39-year-old attorney wife are expecting twins. Now, what we did find out that no one else is reporting, is that the twins are due this June!”

In addition to Chen’s announcement, a close friend of the couple has also confirmed the news, saying: “She’s pregnant with twins.”

Neither the human rights lawyer nor her famous husband have spoken of the good news themselves, though they must be eagerly anticipating the arrival of their double bundles of joy. The loved-up couple were last seen at a special screening of Netflix‘s Syrian civil war documentary, The White Helmets in London that was hosted by The Clooney Foundation for Justice.

See also: Beyoncé announces she is pregnant with twins via Instagram.

This is the first off-spring that either of them will be welcoming. George Clooney was married once before and was notorious for his string of relationships with some of the world’s most beautiful women, before he finally settled down. Amal Clooney has never been married and dedicated her whole life to fighting for human rights and has been an advocate in some of the most high-profile human rights violation cases. They have been married for nearly three years now, and in the video below, George told Ellen DeGeneres about how he proposed to the woman who would become his wife.

Clooney had been asked back in 2015 about whether he was looking to have children in the future, to which the actor responded, “I mean, I’ve thought about it…I’ve been asked about it a lot lately because I’ve gotten married and I’m doing a movie with kids in it.”

As the reports emerged of his impending fatherhood, it is said that his close pal and Ocean’s Eleven co-star Matt Damon burst into tears upon hearing about the news.

We wish the couple a great pregnancy term and we will see them in June when the babies are due!