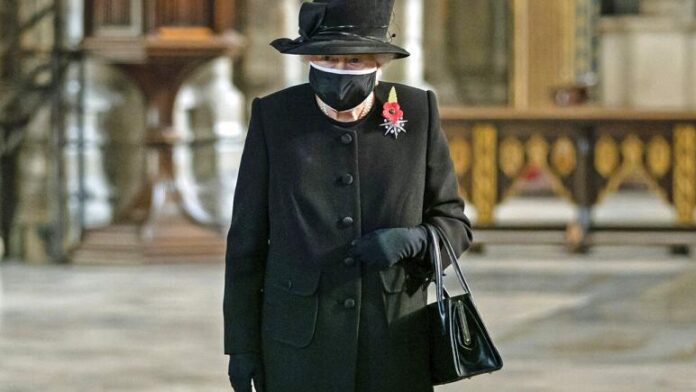 The Queen Elizabeth II, the Queen of the United Kingdom was seen wearing a face mask for the first time in public as she attended a small private ceremony in Wesminster Abbey. Her Majesty marked the centenary of the burial of an Unknown Warrior and honored the British serviceman, the identity of whom remains a mystery. The 94 year old Queen was required to cover her face during the ceremony as per the restrictions put in place by the government.

Her Majesty was seen dressed in an all-black outfit with a matching face cover and a hat as she placed a replica of her wedding bouquet on the grave. The ceremony was a part of the custom of bouquets of the Royal brides  that are places on the bouquets. It is a tradition  that has been in place since the year 1923 the future Queen Elizabeth had laid her bouquet as she entered  the Abbey while remembering her brother  Fergus. He was killed in the Battle of Loos in the year 1915.

Since then a number of royal brides have sent their bouquets to the grave at Westminster Abbey. Even in the year 2002, The Queen Mother had wished that her funeral wreath should be placed on the grave of the Unknown Warrior. During the week’s ceremony, the Queen joined  the Dean of Westminster for a prayer and for the moment when the bouquet was laid on the grave.

The grave that is being honored, is of  a unknown British serviceman who died at the battlefields of the First World War. The body of the serviceman was brought from Northern France and was buried at Westminster Abbey in November, 1920. The Queen continues to self-isolate herself with her husband Prince Philip at Windsor Castle. She wore a black outfit that is typically worn during mourning, while attending a funeral, for Remembrance Day or for Remembrance Sunday services.