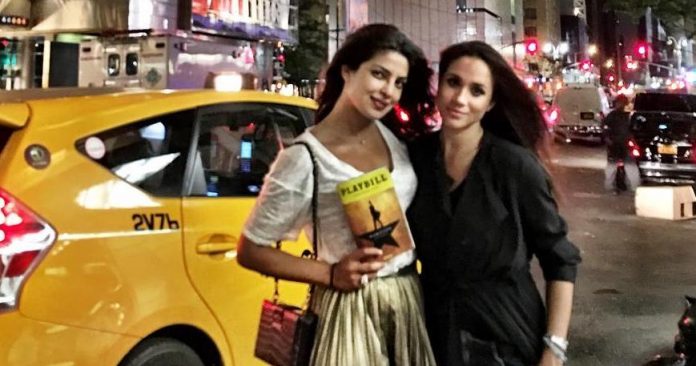 While preparations are on for the upcoming royal wedding of Prince Harry and American actress Meghan Markle, close friend Priyanka Chopra has confirmed that she will be attending the wedding. Some earlier speculations had said that the Bollywood actress will be the bridesmaid for Markle.

With the royal ceremony less than a month away, the Baywatch actress is yet to decide what she will be wearing for the royal wedding ceremony. The 35 year old actress said, “I sort of may have an idea But no, I haven’t picked one out yet.” Priyanka in an interview with a leading daily talked about her close friendship with Meghan Markle and said, “I’ve known Meghan for three years and I’m so happy the way the world has responded to her because as long as I’ve known her … she is a relatable young woman of the world today, She’s that girl who thinks out of the box. She has always been an activist. She has always had a strong voice. She’s an ambitious girl of today. I think the world needs strong role models like Meghan. I think, I hope, Meghan will end up being one of those people.”

The Time Magazine released its 2018 list of the 100 Most Influential People and it had none other than Markle and a tribute that was penned by Priyanka Chopra. The Quantico actress added that she had realized how Markle cared about the world and that with her you could see the real. Priyanka added, “Her compassion, evident in the causes she supports, and her drive to break down stereotypes — obvious in her actions — will connect her to a generation in much need of kindness.”

33 year old Harry and Markle had announced their engagement in November after they dated for more than a year. The couple will get married on May 19, 2018 at the St George’s Chapel at Windsor Castle in England.