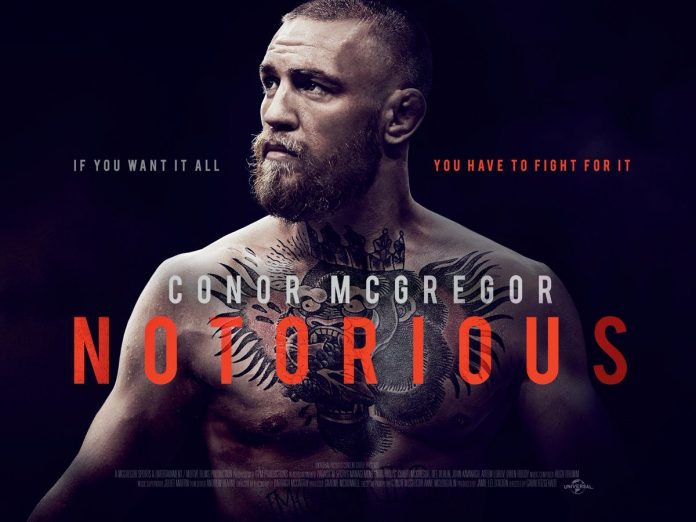 After a lot of speculation, it can finally be confirmed that indeed, a documentary on UFC Lightweight Champion Conor McGregor is on the way. It was McGregor who first revealed a little teaser video on his Twitter, putting fans in overdrive as to whether there was something interesting on the way. He had captioned the video: “Here is another power move for you to get excited about. Happy Monday.”

And now, Universal has officially come forth and declared that there will be documentary on Conor McGregor, and it is to be titled Notorious. The caption for the image reads: “If you want it all / You have to fight for it.” The announcement was made on the Lightweight Champion’s birthday, July 14. The documentary will talk about the rise of the UFC star to become one of the most celebrated sportsmen of our generation.

It’s no surprise that McGregor is co-producing the documentary. Unfortunately, if you’re expecting to grab your popcorn and head to theatres to watch him battle it out on the big screen, you’re going to get disappointed. Notorious is going to go straight to DVD and Blu-Ray and will not be releasing in cinemas. Why? Don’t know.

The release date for the documentary has not yet come out, but we’re sure is sometime around the legendary fight between Conor McGregor and Floyd Mayweather. The stakes are high at $500 million, and the two are already creating a spectacle of themselves when they met up in public at a press conference, making jibes at each other and accusing one another of racism and the like. Notorious is bound to garner plenty of attention even though it’s not hitting theatres.