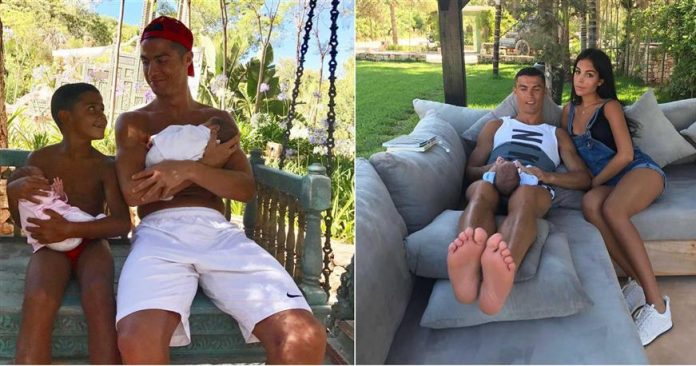 Just a little over a month since the birth of his twins, Portugal star footballer Cristiano Ronaldo has announced that his girlfriend is pregnant with what would be his fourth child. In an interview with a Spanish media network, El Mundo, Ronaldo made the confirmation that Georgina Rodriguez is expecting his child. Speculation began about Georgina’s pregnancy when her social media began showing images of her with what appeared to be a growing baby bump.

Cristiano Ronaldo is a man who seems to enjoy having children. His eldest son, Cristiano Ronaldo Jr. is currently seven years old. He was born from an unidentified woman that tabloids speculate had been a fling of the football star. She is said to be living a normal life somewhere in San Diego and was paid 10 million pounds so that Ronaldo could gain full custody of the child. She also had to never reveal that she is the mother.

His twins, Eva and Mateo were born through a surrogate mother, since at the time he was single. Again, the identity of the surrogate mother has been kept secret. His social media has also been blowing up with love for his little ones, when he first revealed his twins to the world. He had captioned the image: “Happy to be able to hold the two new loves of my life.”

As for Cristiano Ronaldo and Georgina Rodriguez, they are said to have met sometime last year during an exclusive Dolce & Gabbana party. They have been together ever since, and sources close to the couple say that he is ecstatic at the surprise pregnancy. Georgina is apparently very close to his eldest son.