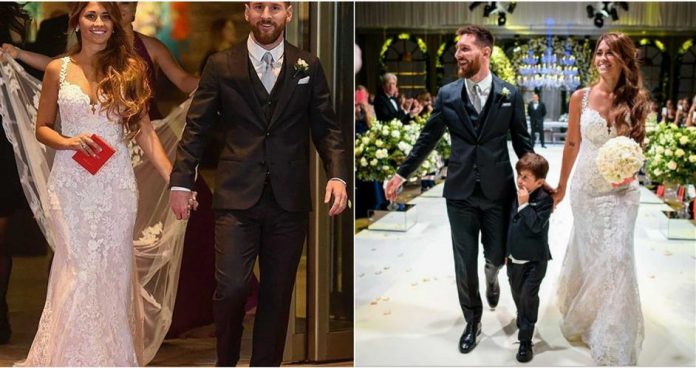 Argentinian football star Lionel Messi married his childhood sweetheart, Antonela Roccuzzo in a lavish private ceremony over the weekend. Those in attendance were loved ones and 260 guests, including football stars Neymar, Luis Suarez and Gerard Piqué and wife Shakira, among others. The wedding was held at the exclusive Rosario’s City Centre hotel and involved security to prevent the media and gatecrashers from catching a glimpse of the newlyweds. Spanish newspapers have called it the “wedding of the century”. It is rumoured that Argentina’s football legend, Diego Maradona was left off the guest list.

Lionel Messi and Antonela Roccuzzo have known each other since the football star was 5. They were friends until he had to move to Spain at age 13 to play for Barcelona, after the club agreed to pay for his medical condition that involves stunted growth. The couple have two sons together, who also played a part in the nuptials of their famous parents. It is said that Antonela wore a wedding gown designed by Rosa Clara, who has previously worked with Desperate Housewives star Eva Longoria and Spain’s Queen Letizia.

The lavish ceremony included a vast buffet that served local treats including dishes that involved various cow parts, as well as empanadas and a sushi bar. Some of the star-studded guests arrived in private jets shortly before the wedding, and were greeted by hundreds of fans at the airport, awaiting their arrival. Lionel Messi, 30 and Antonela Roccuzzo, 29, looked smitten in love as they left their wedding after saying ‘I do’.

Lionel Messi was recently embroiled in a scandal due to evasion of payment of taxes that went into millions. However, he is unlikely to be imprisoned and will need to pay a massive fine for the alleged crime.