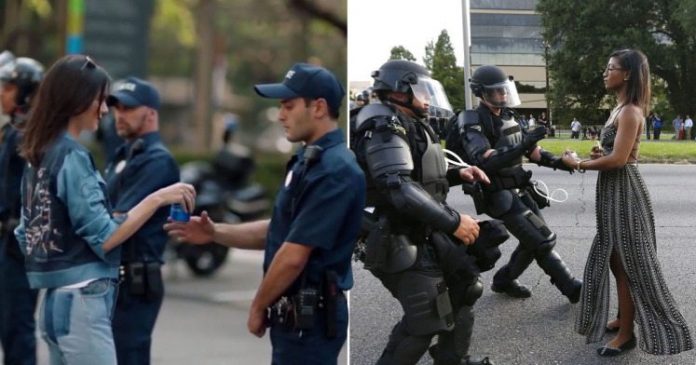 Talk about insensitivity and first world problems! The latest ad by Pepsi has sparked outrage on a national scale, with social media erupting with negative reviews. Kendall Jenner is the star of the ad, and in true Kardashian personality, they always seem to innocently find themselves in a centre of a media storm. Take a look at the ad that has people outraged, threatening to switch to Coca Cola after watching it!

The ad plays to the tune of Skip Marley’s Lions as it begins with Kendall Jenner at a shoot, all glam in a blonde wig and vampire lipstick. She turns around and spots a peaceful protester who moves her to leave the shoot and walk with those millennials making a change. She leads the group now, and confronts a row of standing all white policemen. She finds a barrel of Pepsi cans and hands one over to the police officer. As he drinks it, he’s taken over by the taste of sugar and aspartame and the whole crowd erupts into cheers, while a hijab-clad woman takes photographs of the evolving scene.

The insensitivity comes at a time when there is so much political unrest in the United States, with a lot of backlash against policemen and the hashtag #BlackLivesMatter trending away. To have someone who isn’t even remotely connected to the political movement at the helm of an advertisement, is really unthoughtful. Also, that particular moment that Kendall Jenner confronts the police line with a can of Pepsi looks so familiar – like that moment Iesha Evans stood before a real barricade of cops during a Black Lives Matter protest.

But the most hilarious part are Pepsi patrons threatening to switch to Coca Cola if they have to watch this again. Pepsi issued a public statement, and refused to back down from what would otherwise be considered a major flaw. “This is a global ad that reflects people from different walks of life coming together in a spirit of harmony, and we think that’s an important message to convey.”