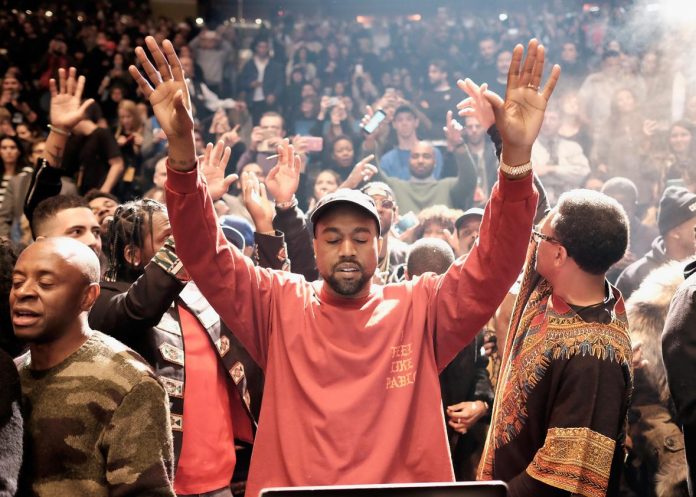 If you’re around town this week, don’t forget to drop by at the corner of Hollywood Boulevard. You might just come across a golden statue of Kanye West impersonating Jesus. That’s right. A life-size golden statue that resemble an Oscar has Yeezy with a golden crown of thorns, outstretched arms, bling about his neck and a pair of Yeezy Boost 350 sneakers on. Below his loincloth, he’s got his new name emblazoned – False Idol.

A United States based, United Kingdom born artist by the name of Plastic Jesus is responsible for this new statue of Crucified Kanye. He is actually a well known underground artist who’s been active for over four years now. He started off as a photojournalist, but has slowly evolved into an artist who loves to cover socio-political topics through controversial artistry, like he’s done with the Kanye statue. This False Idol statue will be exhibited later at Anesthesia: The Art of Oblivion which an event by former Billy Idol guitarist, Billy Morrison. The exhibition is being sponsored by Gibson Brands and Aston Martin and will feature a number of thought-provoking art pieces.

When interviewed by Billboard about the controversial False Idol statue, Plastic Jesus had much to say –

I’ve got six new pieces in the show, and they’re based around a combination of materialism, fame and culture. Anesthesia: The Art of Oblivion is about everything we hang on to in society to make us oblivious of our own plight and our own situation in life — idols, drugs, anything we can pick up in culture.

As a photojournalist, I’ve seen so many times where we’ve built somebody up into an idol, almost a god-like character. When you build people up into a god, there’s expectations you have of them. When these people show they’re only human and they err in some way, we then crucify them in the media. This happened to Kanye just before Christmas — he went into a medical facility suffering from stress, anxiety and paranoia. But as consumers and as the media, we’re all just after a pound of flesh.