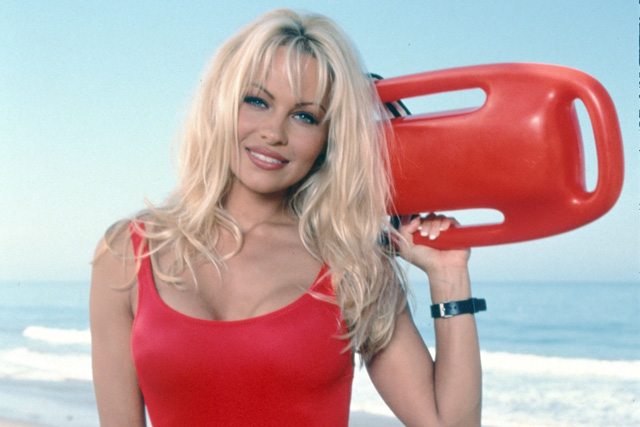 Remember when Pamela Anderson ruled the ’90s as one of the hottest women? The Baywatch actress was a Playboy favorite, even making it to the centrefold for the magazine’s last nude issue. But, it looks like she is slowly retiring from that life and is really embracing ageing very gracefully. We are not trying to shade her, but seriously she looked gorgeous while attending an event in Paris this past week.

Pamela’s usual look was beehive, tousled hair, thick eye makeup and frosted lips along with plenty of tan and bronzer. During her wild days when she dated the likes of rocker Tommy Lee and Kid Rock, she had that rocker chick look that was kind of tacky. Of course, even then she was a bombshell, and whether male or female, everyone was attracted to her.

However, at the event in Paris, she had this total make-under thing going on. Her bleached blonde hair was swapped with honey blonde highlights, thin eyebrows and absolutely little to no eye makeup. Not even her usual fake lashes! She seriously looked like the epitome of gracefulness.

Even her choice of clothing has changed. From wearing little to nothing that accentuated her ample, famous curves, she has gone on to wear more docile and less garish pieces that hint at designer labels.

Whatever she is doing, Ms. Pamela Anderson is doing it well. Just a couple of years ago, she had even chopped off her famous hair to reveal somewhat of a pixie cut that wasn’t really working for her. She has even retired from her usual wild days and is more into fitness, running marathons on the regular. Also, she is still a vocal advocate for animal rights and maintains her vegan lifestyle, having been voted as PETA as the Sexiest Vegetarian Alive.