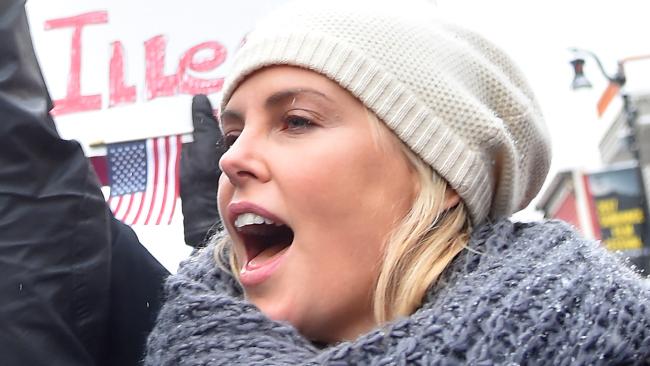 Sorry to interrupt your current hatred of the new President of the United States. Also, we apologize for no Hollywood hot news today. The reason being that half of California and the United States have emptied out into the streets of Washington DC in protest! This weekend, beating out the cold and carrying colorful placards with different woman empowerment declarations, our favorite celebrities are raising their voices for women to have reproductive rights.

By the looks of it, this protest is way off as compared to those done by women in the past. For one, there was a lot of posing and peace-sign making and tongues sticking out for Instagram, rather than professional protesting behavior. But whatever. This is America and this is the age of the millennial.

Here are some of the biggest names that have stepped out in Washington in support of #womensmarchonwashington. FYI, there are similar protests taking place all over the world as we speak, from England to Australia and anywhere else in the world where the weekend is running. Bet Trump is praying for Monday morning to come soon when people have to get back to work and fight the real struggle of LIFE.

The Karma singer took the stage to sing another hit of hers, Girl On Fire.

The High School Musical Star wore netted undies and a poster that are lyrics to the track by Helen Reddy’s I Am Woman.

The celebrity brother-sister also took to the streets with protestors. Him, to support her and she, to support other females.

The Office star and comedienne was seen with Jackie actress, Natalie Portman. Her caption on Twitter was the lyrics to Beyoncé hit – Ok ladies, now let’s get in Formation.

The former Disney star looked more like she was promoting her own foundation, Happy Hippie and she was dripping with HH all over her. At least this time there were no marijuana leaves and twerking involved.

Yes, here is another shining example of women empowerment – a celebrity with her tongue out between the peace sign (if you understand its other meaning).

Out here fighting for OUR rights #pussypower #womensmarchonwashington ???

The Orange Is The New Black‘s Crazy Eyes was seen with a sign that was, significantly, orange on black. It read: “What Meryl Said” – referring to Meryl Streep’s speech at the Golden Globes.

Just as it is difficult to say her last name right, it was also an issue reading an entire speech on a placard. She started off by saying: “The enemy is not lipstick…” and after that, we just move on.

We'll be whoever the hell we want and nobody will shut us up! ??Regram the beautiful @emrata #feminism #womensmarch #fucktrump #fuckpatriarchy #emilyratajkowski #speakup

This Is Us star turned up with Jane Fonda to the march, wearing the famous “pussy hat” and posing with fans instead of protesting.

It's not a movement without #JaneFonda (and @rp1313 & @katherineschwarzenegger)… what a way to celebrate the collective energy of so many people unwilling to sit idly by. One for the books. ?? #womensmarch

John Legend’s wife came along with her husband and spent time posing with fans in a special arena separated for the rich and famous.

The funnyman was at his best, posing in a pussy hat and captioning his photo: “I’m a nasty girl”. LOL

The classy British actress and Beauty And The Beast star greeted fans and also took part in the march.

The ’90s star raised her arm in protest, attending the event for her daughters and all women. Respeck!

I love women. I live for my two daughters. And I am full of pride and unity with all women today.

The Side To Side singer gave the cameras her (annoying? cute?) flying kiss at the march.

The self-acclaimed comedienne posed with friends in orange suits like they were headed for the moon.

The controversial comedienne was with Oscar winner Charlize Theron for the protest. She hasn’t been a fan of Trump since the beginning.

The actress-turned-social activist gave a moving speech at the march, as well.

Will & Grace star wore a pussy hat as well, with a pompom if you please.

Looks like the supermodel has a lot of time on her hands after the Victoria’s Secret Fashion Show. She wore a t-shirt with t*ts to lend her support.

Look! It’s Magneto the mutant! JK, the respectable actor was also there to support the women’s march.