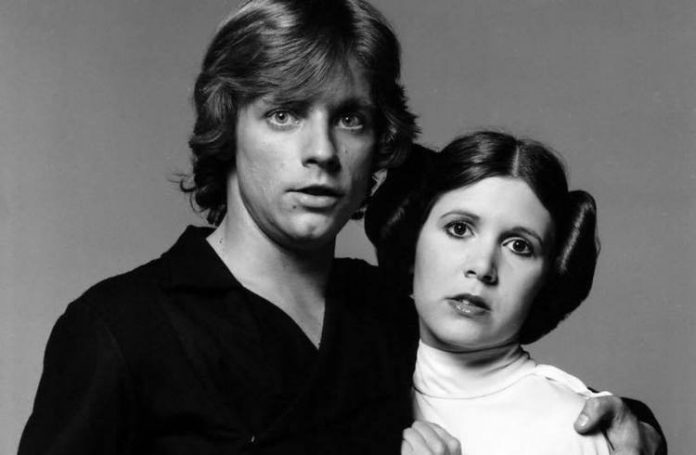 While the world is still reeling from the death of one of Hollywood’s most beloved stars, Carrie Fisher, her co-stars are also taking the time to write about her, especially the great memories she left behind. One of her biggest fans is none other than co-star Mark Hamill, who played twin brother Luke Skywalker to Fisher’s Princess Leia in Star Wars Episode IV: A New Hope. No one can forget the familial chemistry they shared on-screen, but even off-screen, the two were just like family as well. At least according to what Mark Hamill’s sweet memorial letter to Carrie Fisher says.

Carrie and I occupied a unique area in each other’s lives. It was like we were in a garage band together that somehow hit it huge. We had no idea the impact that Star Wars would have on the world. I remember we were out on tour right before the movie opened. By the time we got to Chicago, there was a crowd at the airport. I said, ‘Hey look, you guys, there must be somebody famous on the plane’. I was looking around to see who it might be. And then in the crowd I saw a kid dressed in a Han Solo vest. Then I saw a girl dressed like Princess Leia. I said, ‘Oh my God, Carrie – there’s somebody dressed just like you. She’s got the buns on her head!'”

He also wrote about the first time he met Carrie on the set of A New Hope. “I mean, she was just so instantly ingratiating and funny and outspoken. She had a way of being so brutally candid. I’d just met her but it was like talking to a person you’d known for 10 years. She was telling me stuff about her stepfather, about her mom, about Eddie Fisher – it was just harrowing in its detail. I kept thinking, ‘Should I know this?’ I mean, I wouldn’t have shared that with somebody that I had trusted for years and years and years. But she was the opposite. She just sucked you into her world.”

He continued about how life with her was on the set of the movie, during filming. “I would do crazy things to amuse her on the set. Making her laugh was always a badge of honor…The lengths I would go to hear her laugh – there were no limits. I loved her and loved making her laugh.”

Hamill and Carrie stayed close as friends long after the Star Wars series wrapped up for the moment after Episode VI. They continued to be in regular touch and had been friends for over four decades. Hamill says Fisher “would do these crazy things and make me do these crazy things, but I really don’t think they were crazy after all. In a way, it was a defence mechanism for her. She was so off the wall, she could use it as protection. Part of what was so poignant about her was that she was vulnerable, that there was this glimmer of a little girl that was so appealing and it roused the protective nature in my personality.”

“We ran the gamut over the years, where we were in love with each other, where we hated each other’s guts. ‘I’m not speaking to you. You’re such a judgemental, royal brat!’ We went through it all. It’s like we were a family.”

Earlier, in an interview with The Hollywood Reporter, Mark Hamill spoke lovingly about Carrie Fisher and said she was “able to make you feel like you were the most important thing in her life. I think that’s really a rare quality. And then you could go 180 degrees opposite, where you were furious with one another and wouldn’t speak for weeks and weeks. But that’s all part of what makes a relationship complete. It’s not all one-sided. Like I say, she was a handful. She was high maintenance. But my life would have been so much drabber and less interesting if she hadn’t been the friend that she was.”

And in more Carrie Fisher news, the late actress’ authored memoirs are flying off the shelves, so much so that they have now gone into reprint! President and Publisher of Simon & Schuster Publishing group, Jonathan Karp said: “We are responding to the outpouring of Carrie Fisher’s work and are quickly reprinting her books. All of them have remained in print, but our supply was wiped out by demand. We’ll have more books this week.”

Carrie Fisher’s latest book was The Princess Diarist which was published in 2016 and has already reached the bestseller’s list. In this memoir, she famously spoke about her affair with co-star Harrison Ford who played her on-screen love in Star Wars.