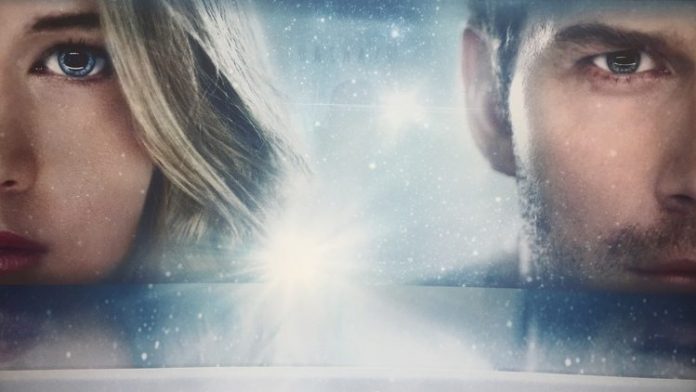 Passengers can save the human race, but can it save itself from ratings?

Here is a movie with a stellar cast – Chris Pratt and Jennifer Lawrence being the center of the script for almost the entire movie. Then there’s the talented, witty Martin Sheen and the short-lived character played by Laurence Fishburne. What could possibly go wrong?

Passengers is a movie with high hopes and an over-extended budget of $110 million. It was supposed to be the perfect sci-fi film – a technical storyline, interstellar backdrop, spaceships – along with a healthy dose of humor, human emotion and a love story mixed in. Did the movie succeed in its premise?

The starship Avalon is traveling fast, bound for the colony, Homestead II. 5,000 colonists have been chosen for the project, but it will take 120 years for them to reach their new home. Waking up 90 years too early, engineer Jim Preston finds himself isolated for an entire year. He lives off automated food and the wit of a droid bartender, Arthur.

One day he finds another pod in slight disarray. It belongs to the sleeping beauty, Aurora Lane, a writer by profession. Given a shot at having human company for the first time in an entire year and not knowing when he will get this chance again, Jim decides to shut off her pod. Aurora is awakened and shocked at what has happened, but soon she and Jim fall in love and everything seems fine. Since she is a writer, Aurora decides to begin writing her experiences in a book.

A year later, Gus, one a Chief Deck Officer is awakened due to a similar malfunction in his pod. Aurora has also uncovered the truth about her awakening and berates Jim for what he did. But there are bigger issues at hand. The cause is due to an asteroid collision that had taken place a couple of years before, but they are yet to understand that, when Gus’ body starts to fail. The Autodoc is unable to save him, and Gus soon passes away, making Jim and Aurora realize their imminent fate. They end up saving Avalon, but must now try and save themselves. Aurora has to make the decision to either forgive Jim and choose to spend the last of their days together, or go back into the safety pod and live to see her new home…

Once the ship has landed safely in Homestead II 88 years later, the remaining survivors are welcomed by animals and vegetation galore. But, there are two residents missing – what is left in their wake is the book of experiences written by Aurora Lane.

What director Morten Tyldum has said about Passengers –

“Yes, it was a popular script. It’s one of those stories that really grabs you and you fall in love with it. It’s very smart and funny and clever and such a page-turner I couldn’t put it down. Every 10 pages, something new happens! At the same time, it’s a very intimate movie, while taking place on this epic scale. For me, it’s a story about what’s important to live a full life. What are the things we need as humans? It’s not afraid to entertain but at the same time it asks big questions about what does it mean to really feel happy. Every generation has its love story. I feel like this is it. I had to do it.”

What the critics are saying –

“Neither the rapport between Jennifer Lawrence and Chris Pratt nor the impressive effects can quite redeem this shallow sci-fi.” – Wendy Ide, The Guardian

“Ironically, Passengers is at its most evocative when capturing a state of utter tedium.” – Christopher Orr, The Atlantic

“Pratt and Lawrence are wonderful and share decent chemistry, and Sheen adds wit, but, there’s no mistaking the disturbing nature of this movie’s premise.” – S. Jhoanna Robledo, Common Sense Media

Passengers was released on December 21, 2016 in theaters worldwide. It has earned a total of $126 million in revenue, though the ratings haven’t been that optimistic, earning an average of 31% on Rotten Tomatoes.