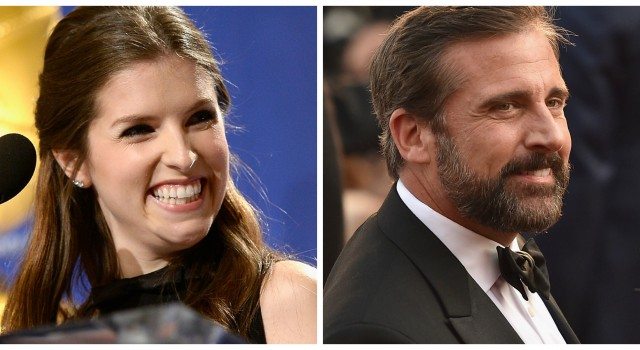 We had announced the Golden Globe nominees for 2017 earlier. Also, we now know that Late Night show star, Jimmy Fallon will be hosting the 74th Annual Golden Globe awards – and we are super stoked.

But here comes some more happy news for the event – it has also been confirmed that one of Hollywood’s most fresh and loved comedians – stars Anna Kendrick and Steve Carell have been selected as award presenters for the show.

Anna was nominated for a Golden Globe herself back in 2009 for her role in Up In The Air and also received an Academy Award nomination for the same movie the same year in her supporting actress role. Earlier this year, she was seen in another shining role in The Accountant and also lent her voice talent for the animated movie, Trolls. Next year is going to be a big year for the 30-year-old star as she plays parts in two movies – the wedding-themed Table 19 and also reprises her role in the hit movie franchise Pitch Perfect 3. One of her earliest roles that catapulted her to fame was playing Bella Swan’s best friend in the Twilight movie franchise. Suffices to say she was one of only a handful of her co-stars who managed to maintain a successful Hollywood career after the last film. If you’re into social media, you need to follow her Twitter account for some feisty tweets that has earned her millions of followers for her wit in 140 characters.

Steve Carell, her fellow presenter, needs no introduction. He is one of Hollywood’s biggest comedians and has acted in a number of movies and brought comedy to the forefront. From films like Bruce Almighty to Get Smart, Evan Almighty and so many more films, it’s safe to say that Steve is a veteran comedian in the field. In 2006, he was nominated over 6 categories and won for one at the Golden Globes for his role in The Office. In 2015, he was nominated once again under multiple categories for his role in The Big Short. Next year, we see him reprise his role as Gru in Despicable Me 3 as well as play Bobby Riggs for Battle Of The Sexes.

The 74th Annual Golden Globe Awards will take place and be aired on Sunday, January 8, 2017.