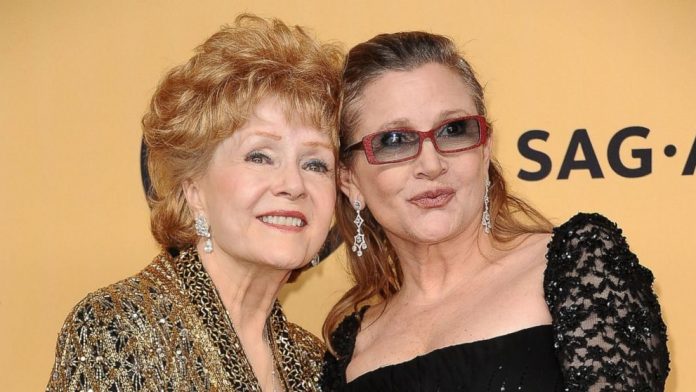 As Hollywood mournfully bid farewell to their favorite on-screen princess, Carrie Fisher on December 27, 2016, it looks like there is going to be a double funeral in the Fisher household. Carrie’s mother, veteran actress Debbie Reynolds shortly suffered from a stroke following the news of her daughter’s death, and breathed her last just a day later.

Debbie Reynolds was always around her daughter. And it seemed like their closeness couldn’t keep them apart any longer when death came knocking on Princess Leia’s door. Close friends and family are saying that all she wanted was to be with her daughter, and it looks like the Grim Reaper has answered her prayers. She is survived by another daughter and son. Her granddaughter, Scream Queens star Billie Lourd is receiving major support from Hollywood since losing both her mother and grandmother, who she was close to.

The beautiful star rose to fame with her role in the hit film Singin’ In The Rain that earned her an Academy Award nomination. She starred in many hit movies during the golden Hollywood years, including How The West Was Won, The Unsinkable Molly Brown for which she won her second Academy Award nomination and also played Grace’s mother on Will & Grace that won her Emmy award. Her professional career is glittered with multiple major nominations and awards, as well as on-screen characters that will live forever.

Like her late daughter, Debbie Reynolds had quite the public life of ups and downs. Her most infamous time in the news was when her husband, fellow actor Eddie Fisher was caught in an affair with Elizabeth Taylor, shortly after the latter’s husband passed away. Though it led to a very public divorce, Debbie later confirmed that she and Elizabeth made up years later while on a cruise after the death of Fisher.

She also famously bought an entire hotel and renamed it Debbie Reynolds Hollywood Hotel back in the early ’90s, but it didn’t do well and she had to file for bankruptcy. She also set up a dance studio that still runs today in her favorite place on earth – Hollywood.

Truly, 2016 has been the year of losing legends.