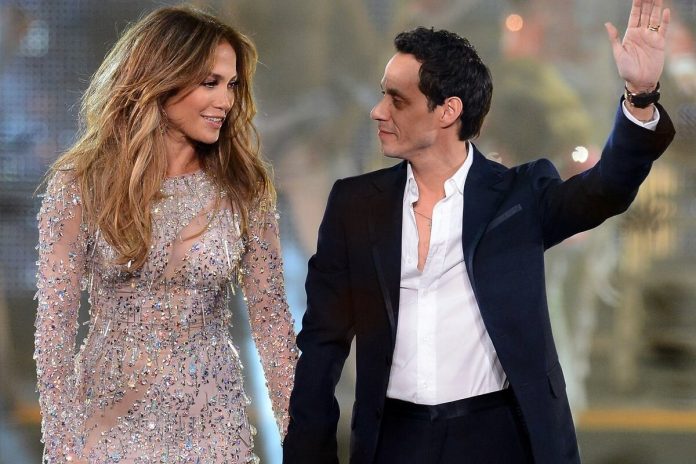 The Internet is taking sides over this, so it’s up to you to play judge and tell which side should win this ish. This is what the world wide web is freaking out about. During the Latin American Awards, famous exes Jennifer Lopez and Marc Anthony performed a sizzling duet and ended their performance in what should have been seen as a friendly ex. After all, the two have been professionally involved forever having collaborated on a number of hot latin singles, and were married, divorced after that seven year itch and have two beautiful kids together.

Of course, because the media loves drama and looks too closely into things, it was decided that there was something a little to the romantic side going on between the famous pair, and this news apparently reached the eyes and ears of Marc’s current wife, Shannon DeLima. Some say she is being too clingy and cautious, while others say she is doing the right thing – but the news is out now that the married pair are calling it quits and are separating, amicably parting ways. Over a televised kiss? Really?

Jennifer Lopez’s management were quick to respond to the oncoming backlash the megastar would receive, having once again been involved in breaking up a relationship, so her manager released a statement saying the exes are “absolutely, categorically, 100 per cent not back together”. But these “statements” happen loads of times when celebrities say this and that, until there’s an exposed bun in the oven, someone tattles off to the press or someone is wearing a surprise ring on that finger. Until then, we gossipers wait and well, gossip.

Noted Hollywood tabloid, TMZ has stated that their on-stage collaboration was only professional and had nothing to do with them being romantically involved, because that’s just not happening. JLo and Marc Anthony are co-parenting adolescent kids, for crying out loud and have been professional buddies for years and decades to come. If there’s any suspicion going on, it has to do only with Marc’s now estranged wife, Shannon. In any case, both Jennifer and Marc have had so many failed relationships, it would make sense for them to stick to being professional and on friendly terms. Right? What I want to know is, how the hell does he get all the beautiful Latin women?