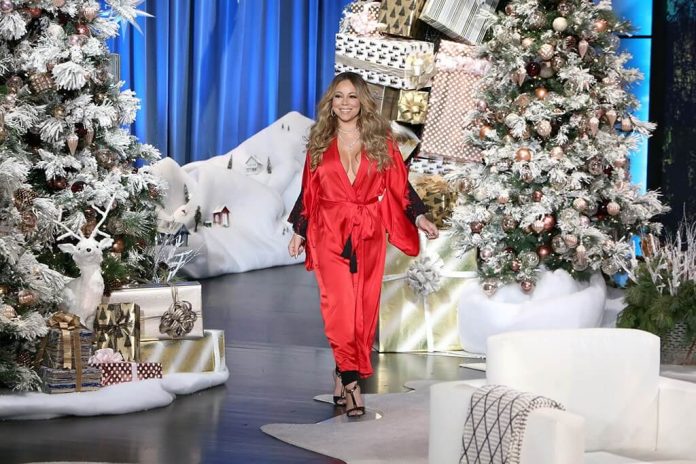 Pop queen of Christmas, Mariah Carey looked fabulous as she made her (usual) dramatic entry on The Ellen Show. Dressed in a silk red bath robe with black lace trimmings, she playfully took it off to reveal a waistcoat and black trousers, with no shirt, but plenty of diamonds around her neck and big hoop earrings. Host Ellen DeGeneres poked fun at the absence of her shirt, gesturing to her general chest area and saying, “there’s a lot of festivity going on there right now”, as they spoke about the upcoming holidays.

Ellen asked Mariah about her new docu-series, Mariah’s World, which goes behind the scenes of the pop legend’s tour life and how she makes it all happen. She even brought up Mariah’s now ex, Australian billionaire James Packer. The two split up after a dreamy romance that ended on a holiday in Greece. Mariah said it was “alleged” that he didn’t want to be a part of the series, but hinted that he actually did and part of the episodes even feature her trying on wedding dresses, something that will just remain a fantasy, at least for now. There have been no signs of them getting back together, especially after she was pictured out and about town with a hot backup dancer, and she’s also kept the engagement ring and demanded $10 million as settlement.

The intrusive host, who btw always keeps it classy but still tries to get information from her guests, prodded the former American Idol judge about the failed relationship, and how she’s doing now that it’s over. The sad part is that Mariah and husband, Nick Cannon officially finalized their divorce just days before Packer wanted out of their courtship. Nick is now preparing to welcome the birth of his daughter with an ex girlfriend, Britanny Bell. Welcome to Hollywood, guys.

I think I’m doing well…Everything happens for a reason. Things are the way they are. It’s kind of difficult to talk about at this moment, so I’m just doing to compliment you on these decorations, once again, because they are fabulous and I’m here.

That’s Mariah being Mariah. She was also questioned by Ellen about provocative photos of herself that she had posted to Instagram in a series of intimate shots of herself while on holiday in Greece, as a still-engaged woman. Ellen first said they were showing an image of a tree, and then boom, there is Carey in a bubble bath with diamonds all about her. She had captioned the image “Bubbly times selfie”.

Just got home after a long night at the studio!!!!! New music coming soon yayyyyyy

Mariah defended herself, saying it was 4 in the morning when she decided to “take a bath” and then a female, who’s name she did not disclose, insisted on the photography. Ellen asked her what she was doing wearing diamonds in the bath, and the pop star gave a weak response, saying she couldn’t take it off and didn’t have anyone at that time to do the needful. Ok, Mariah, we know how Instagram works. And she also said she had a bodysuit under the bubbles, so that’s really not her being naked. Ok, ok, enough now.