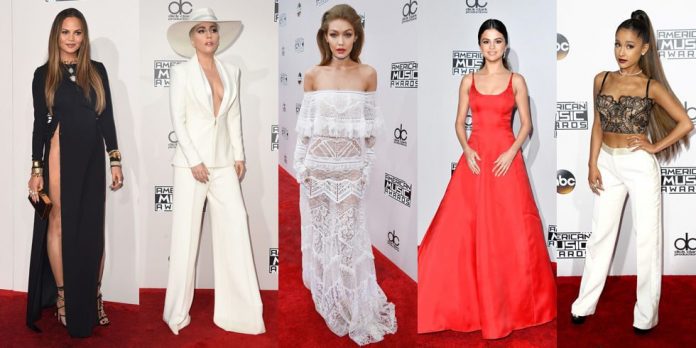 When it comes to Hollywood, you can only expect drama. Sometimes it’s a good thing that brings social issues to the forefront; otherwise it’s just for scandal so social media can start buzzing and the moment can go on trending. The American Music Awards (AMAs) 2016 is meant for those who have contributed to American music in Pop, Rock, R&B, Soul, Hip-Hop, Rap and Country (no sign of “Metal”, but then again, metalheads love being the epicentre of a hurricane, rather than of attention). This year’s awards night was hosted by Gigi Hadid and Jay Pharoah, and their pre-practiced jokes were slightly off-putting, but then again when you have a face like the Victoria’s Secret angel, nothing you do is wrong. Here are the top moments from the American Music Awards (AMAs) 2016. Judge for yourself.

Selena had in August given an interview to People Magazine to discuss her battle with Lupus and declare that she was “taking a break”. She made a surprise return to the red carpet, looking beautiful in a prom-like red gown and later graciously accepting her award for Best Female Artist – Pop/Rock. Her acceptance speech was raw, emotional and mature. Here’s what the Kill ‘Em With Kindness singer had to say –

In 2014 this stage was actually the first time that I was authentically, 100 percent honest with all of you. I think it’s safe to say that all of you know my life, whether I like it or not. I had to stop because I had everything and I was absolutely broken inside. I kept it all together enough where I would never let you down but I kept it too much together to where I let myself down. I don’t want to see your bodies on Instagram. I want to see what’s in here (holds chest). I’m not trying to get validation nor do I need it anymore. All I can say from the bottom of my heart is I am so grateful that I have the opportunity to be able to share what I love every single day with people that I love. I have to say thank you so much to my fans because you guys are so damn loyal and I don’t know what I did to deserve you. If you are broken you do not have to stay broken. If that’s anything whether you respect me or not, that’s one thing you should know about me. I care about people. Thank you so much for this. This is for you.

Many people have a problem with Gigi’s clomping on the runway. Now, Twitter went crazy when the supermodel tried to act like Melania Trump with a cheap impression. The moment had nothing to do with music or the awards night, but probably because she was handed a script and a fat check and thought it was funny to bully a fellow immigrant, just like her parents once were. It was simply in bad taste. If you don’t believe me, check out this Twitter video. She makes a face and tries to talk in a horrible version of a Slovakian accent.

High off the success of her risk-taking, breathtaking album, JOANNE Lady Gaga was the true performer of the night. With a guitar, a chair and a stage that looked like a garden in a starry-night, she belted out the album’s top ballad – Million Reasons. Lady Gaga is beautiful in every way and to see her go from strength to strength with every album and performance she puts out, it’s true pop legend in the making. Oh, and she appeared on the red carpet earlier in the evening in a white pantsuit, which could have been a tribute to Hillary Clinton.

They were the punk band of the 2000s, and their highly political energized tracks catapulted them to cult stardom. Now that they’re back with their hit Bang Bang, Green Day made it a performance to remember and were open about their opposition to current President-elect of the United States, Donald J Trump. Lead singer, Billie Joe Armstrong led a chant of: “No Trump, No KKK, No Fascist USA”. Ok, we hear you!

There you have it, the Top Moments from the American Music Awards (AMAs) 2016.

Check out the fashion moments from the American Music Awards (AMAs) 2016.

Here’s the complete list of winners from the American Music Awards (AMAs) 2016.