Harry Potter fans and those who love anything that involves magical creatures, wizardly and witchcraft can celebrate because the Fantastic Beasts and Where to Find Them is here! It is one movie which is going keep the audience engaged throughout he movie. The movie is based on a book by the well known author J.K Rowling, even though in this case she uses the pseudonym Newt Scamander who is actually the main character in the movie.

Plot of Fantastic Beasts and Where to Find Them

The time is 1926 in New York and it is 70 years before Harry Potter arrived in Hogwarts. Newt Scamander is an adventurer who has just finished his global research and collecting magical creatures which he keeps safely hidden in his leather case. He makes a stop over in New York but things get messy when his case is misplaced and some of the creatures escape no thanks to No-Maj (which means American muggle) Jacob Kowalski. Newt together with his new found allies who are Tina, Jacob, and Queenie have to work together to bring the creatures back  safely in Newt’s magical case before any harm comes to them. It proves to be a little difficult with having to deal with untamed creatures roaming the city and also fanatical organisations like the New Salem Philanthropic Society whose main agenda is to rid the world of magic by killing witches,wizards and all magical creatures.

Cast of Fantastic Beasts and Where to Find Them 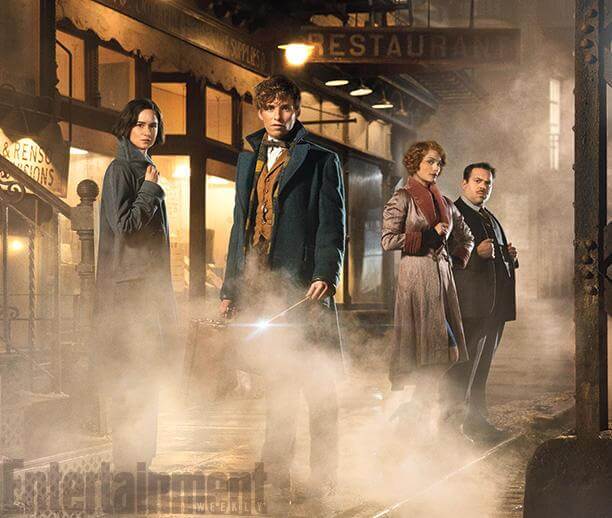 Filming commenced on 17 August 2015 where most of the scenes were shot in St George’s Hall in Liverpool which provided the perfect set up for the 1920s New York look. It will be released on 18 November 2016 in 3D in the U.S and U.K and on 17th November in Brazil. If you have not marked the premiere date on your calendar you better get to it because this is a movie no one can afford to miss.

Straight From the Global Fan Event

A live fan event took place for Fantastic Beasts And Where To Find Them involving a Q&A session with J K Rowling. She’s revealed that only 3 series were originally planned, but now the plans are for five movies in the series.  We still don’t have much details , will keep you posted.

Here’s a glimpse from the fantastic Beasts Global fan event, take a look!

Here we have for you the official trailer of Fantastic Beasts And Where to Find Them!