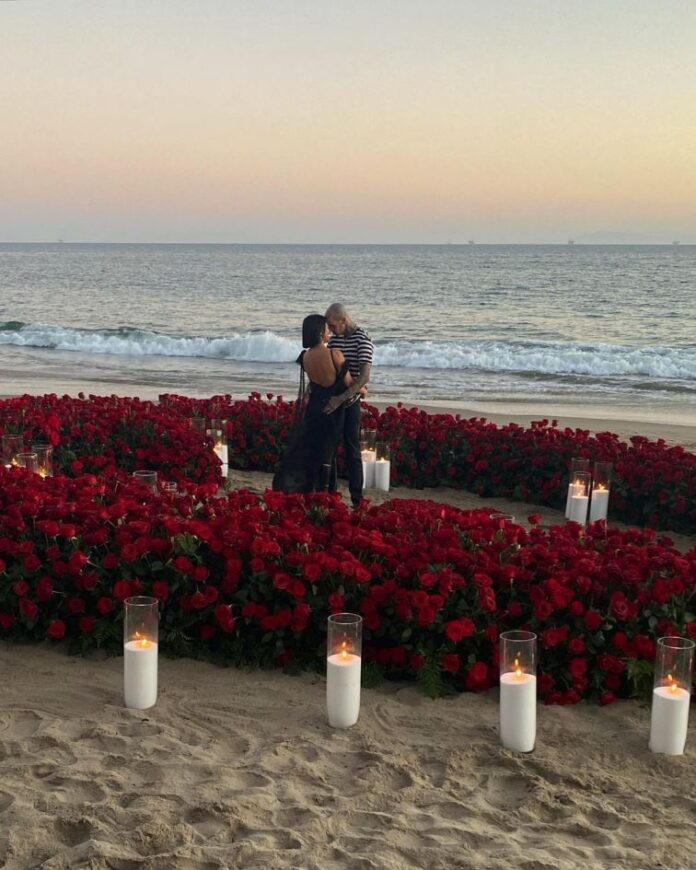 American model and socialite Kourtney Kardashian and partner Travis Barker are now officially engaged. The American musician proposed the  reality TV star in the most romantic way at a beach in Montecito in California. The couple made an official announcement on the social media by posting a few adorable pictures from the moment and captioned ‘Forever’. Soon after the post went viral, congratulatory messages started to pour in from the friends and well-wishers of the couple.

Kourtney’s sister Kim posted a video of the couple kissing that showed the engagement ring and had the track Marry You by Bruno Mars. The 45 year old Blink-182 drummer arranged the proposal at the beach near Santa Barbara in California. Going by the pictures, it was an elaborate arrangement  that had red flowers and candles on the sand. The news of the engagement was also confirmed by the representative of Kourtney, but no other details were revealed.

Rumours started to spark  at the beginning of 2021 and they went public about their relationship on Valentine’s Day after being friends for years. Kourtney Kardashian is the youngest of the sisters and has three children from her former partner Scott Disick. However, this will be her first marriage with Barker. Travis is a popular American musician who is also a renowned drummer. He is a father of two and has been married twice. Barker was also married to former Miss USA Shanna Moakler.

Travis Barker and Kourtney have constantly kept their fans updated about their relationship by posting pictures on social media. It was in the month of August when Barker had taken his first flight, after he survived a plane crash in 2008 that killed four other people. Travis had credited Kourtney, who reportedly helped him to overcome his fears. The drummer also owns the clothing company Famous Stars and Straps found in 1999 and LaSalle Records  that was found in 2004.